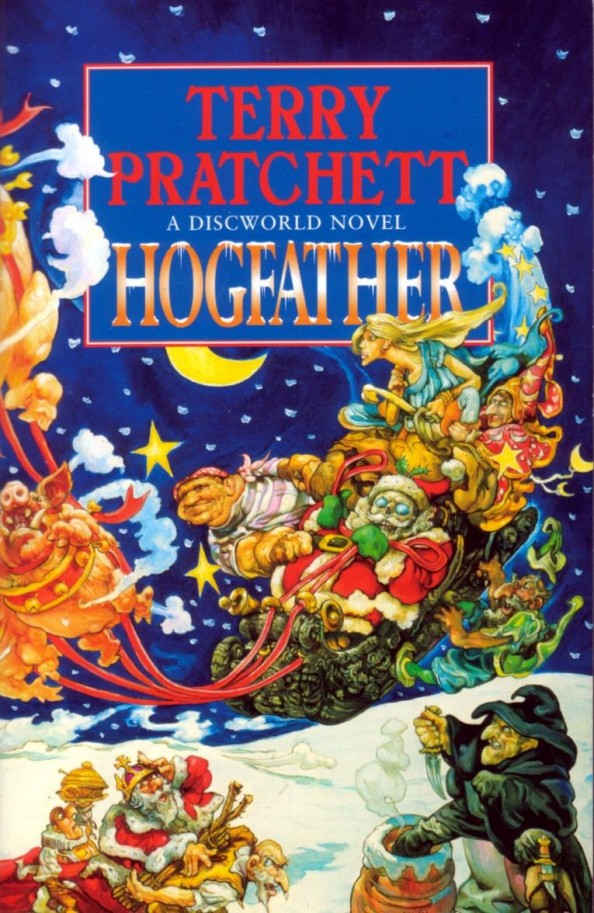 Welcome back everyone.  This week, we continue our look at Christmas literature by seeing a story that goes out there.  And I mean out there.  Like giant space turtle out there.  Today, we examine a story we’ve mentioned on this site before as one of the best Christmas stories/satires ever- Terry Pratchard’s Hogfather.

On the Discworld city of Ankh-Morpork, the people are celebrating Hogswatch, a holiday with surprising similarities to Christmas.  However, their version of Santa Claus, the Hogfather, has vanished, due to the efforts of the Auditors, who dislike human imagination and belief, and the efforts of Jonathan Teatime, an assassin hired to eliminate the Hogfather.  However, Death has stepped in to temporarily replace the Hogfather, performing his duties in order to keep belief going.  At the same time, Death’s granddaughter, Susan Sto Helit is drawn into the mix as the lack of belief for the Hogfather has created excess belief, resulting in new beings being created simply by naming them (the God of Hangovers, The Eater of Socks, the Veruca Gnome).  Susan must discover the reason behind the Hogfather’s disappearance, and then save him or the Discworld will never see another morning.

What Writers Can Learn: Satire, Nature of Belief

The Discworld novels, as mentioned before, are full of satire and pokes at the ridiculous nature of society.  Hogfather is no different, as many of its pages poke fun at the traditions of Christmas.  The Hogfather himself is a symbol of how Hogswatch has evoled, having begun as a pagan god of the morning and changed over time as Hogswatch itself has.  Christmas has undergone the same progression from pagan ceremony to Christian holiday.  The commercial aspect is mocked as well, done best when Death makes an appearance at a store.

The store’s cheerful sleigh display is destroyed for the much rougher (but more realistic) true sleigh, and as he sees the children, Death questions why the store complains when he gives the children their gifts for free (as the Hogfather is supposed to do).  There is also a little girl who asks for a sword, despite her mother’s insistence she wants a doll.  Christmas morals are also examined- how children are more selfish then we like to let on (though a story where a little boy wants a toystore horse, is instead giving a handmade replica and is bitterly unhappy), and the story of the Little Match Girl (who supposedly dies in the snow so that people are grateful for what they have), who is instead saved by Death, as ‘there is no greater gift then a future.’

But Hogfather is also a way to view the peculiarities of belief.  As mentioned before, belief is what keeps the Hogfather active, and the lack of said belief causes other beings to pop on in his place, a comment on the human quirk of assigning unexplainable tasks to fantasy creatures (the Tooth Fairy, for example).  However, the nature of the Hogfather himself shows a much greater example of the need for belief.  Susan, following the adventure, questions her grandfather on what would have happened had they failed.  Death explains that the Discworld would not have been lit by the sun, but by a flaming ball of gas.  He further explains that humans need fantasy to be human, and beings like the Hogfather are a way to introduce ‘the little lies’ to children, so they will believe the ‘big lies’- justice and order.  Susan is shocked, but Death asks her to put the universe through a sieve and try to find a single, physical grain of those qualities, and yet humans continue to act and believe that there is a cosmic order and logic to the universe.

The concepts of belief, and further satirical attacks on humanity are explored throughout the Discworld series, as are other stories featuring Death (recommendations include Reaper Man and Soul Music).  And be sure to stop by next week for our final holiday outing.

Greetings once again. I apologize for my recent absence, as work and personal matters kept me away last week. However, part of that time was also spent examining a rich writing source that I wish to discuss today. That is the work of British fantasy writer Terry Pratchett- the novels of Discworld.

Discworld is an epic series of novels based in the realm of Discword, a flat, disc-shaped planet that sits on the back of four giant elephants, that travel through space on the back of a giant turtle. Despite the fantastical setting, the world is generally based on Victorian England, albeit with the additions of magic, wizards, and other fantastical elements. Unlike most fantasy novels, Discworld does not focus on a singular character or group of characters (though there are repeat characters and multi book arcs). Instead, each story generally stands apart, usually connected only by the realm itself. As such, Pratchett uses the books as satire, mocking not only fantasy novels themselves, but also elements of the real world, though serious elements do inject themselves as needed.

What Writers Can Learn: World-Building, Satire

Since the realm of Discworld is generally the connecting element for these novels, readers are given an extensive view of a world being built. Readers are shown a variety of cities, such as Ankh-Morpork, which house a wizard university and a variety of Guilds (from Musicians to Assassins). There are also numerous supernatural creatures from vampires to the Tooth Fairy and the Soul Cake Duck ( a play on a British holiday that fills the role of the Easter Bunny). Gods are also portrayed, as well as figures close in power like the Universal Auditors.

However, the great part of these novels are the satire involved. Pratchett uses the books to take excellent shots at the modern world, from rock and roll (Soul Music) to the advancement of technology (Reaper Man) However, the greatest pieces come from the character of Death. While portrayed traditionally, the Death of Discworld is less grim then other depictions. He is effective at his job, but continually fascinated with humanity, and far more compassionate then other versions. As such, his outsider perspective allows for a great deal of satire towards human behavior.

For example, in Reaper Man, where Death is fired for showing compassion (as he has adopted a human daughter), he is forced to find work on a farm. There, he forms a bond with the farmer owner and reveals in being able to form relationships. However, he is aware that a new Death is being formed, which eventually takes over a harvesting machines that threatens to put Death out of a job. Death must literally battle this new, uncaring Death before arguing to his superior (the God Azrael) that Death must care, or else it does not exist and there is only oblivion (a nod towards the metaphor of the knowledgeable farmer and the buyer who doesn’t care about the harvest). At the same time, the universal imbalance forces the wizards to battle a life form built up from the extra life energy, that feeds on cities and eventually forms into a shopping mall (hopefully this satire requires no explanation).

Hogfather, which focuses on the Discworld equivalent of Christmas, is another example. The Hogfather (Santa) goes missing, which forces Death to take up the role to continue human belief. Though the novel, Pratchett not only satirizes Christmas (as the Hogfather is the current version of a bloody god worshipped in the winter to bring back the sun,), but through Death, how humans interact with it. Death is puzzled by watching children pretending to be sweet and innocent to get more presents, and how adults are more interested in selling then giving. He also is saddened by the story of how a child is given a handmade toy rather then a store version and still acts greedily, rather then accepting the more meaningful toy. At one point, Death even rescues a little match girl (ala Hans Christian Anderson) from the cold, despite arguments that her death is a traditional part of the season, so that people will be grateful for what they have. Yet at the same time, Pratchett makes the point that the Hogfather is important because without belief in a small seasonal being, children will grow up unable to accept belief in larger matters that have no physical evidence (justice, mercy, universal order).

Discworld goes far beyond the novels mentioned here and expand their satire with other characters including Death’s extended family. They stand as an enjoyable and hilarious fantasy story that alwas manages to carry a strong satirical message. Writers should take note not only of the world creation, but at the novels’ ability to hide potent messages inside humor and a ridiculous fantasy world. And for anyone who feels this is impossible, keep in mind that Pratchett who is still writing, suffers from Alzhiemers (treatments have kept most of his mental functions, but he must now dictate his works). Hopefully, the imagination he has shown is enough to inspire other worlds from writers; perhaps even on the backs of flying squirrels.