← Points of Light: Stephen King
Portals to Darkness: The Mary-Sue →

Since I spent last week talking about an author that inspired me, I felt I should continue the trend with another highly influential author. A longtime source of classic fantasy literature, the work of this particular author was what convinced me that Lightrider would even be possible to attempt. This author is the one and only, Terry Brooks.

A writer since high school, Terry Brooks first drew attention in the seventies with his first novel, The Sword of Shannara, above the adventures of the Ohmsford family, last descendants of the Elven house of Shannara in a multi-cultural medieval land reminiscent of Tolkien’s Middle Earth. Brooks then turned the novel into a long running series, with each book dealing with a different generation of the Ohmsford family and their allies, usually linked by one of the ancient Druids (first the grim and dark Allannon, then his sucessors) or another character from the previous books. While the series has been a hit, Brooks has also expanded into other series, such as the contemporary fantasies of Kingdom of Landover and Knight of the Word (which has been linked to his Shannara books). Brooks continues to write to this day, currently working on the next volume of Shannara. 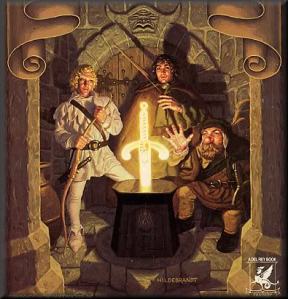 When I started writing Lightrider, I truly wondered if I could really make this idea of high fantasy in the everyday world work. After all, I was here telling a tale of resurrected animal-men that had power of the elements, fighting ancient monsters that wanted to destroy existence, all while the real world chugged along. But Terry Brooks put those thoughts to rest with his work. Landover and Knight of the Word introduced me to contemporary fantasy, a genre on mixing fantasy with the real world. His books showed me how to blend the two without overshadowing one or the other, as well as give me inspiration for my own work. Landover’s main character is Ben Holiday, a depressed Chicago lawyer who answers an add to run a magic kingdom after his wife and child are killed, and must then learn to be a king when the add is real. Word’s John Ross is a man chosen to become a Knight of the Word, but crippled by his magic and forced to endure horrific dreams of an unbalanced future where demons rule. These characters played a large part in the shaping of my main character, Joe Hashimoto, as well as demonstrating the weight of the responsibility of being a servant of good, and of course, how to have demons and knights in a world of skyscrapers and 7-11’s.

But beyond that, Brooks’ taught me the simplicity of writing. In many of his Shannara books, Brooks’ paints pictures of epic battles taking place on great fields. I had similar ideas, but had no idea how to properly describe such a massive battle. Again, Brooks taught me this through his work, namely how simple he was in painting his battle pictures. The two sides were painted as wholes, save some interaction by major characters. Brooks focused on the battle as a whole, not stopping to divulge character’s thoughts or impulses. By doing that, he forced the reader to focus on the battle itself, and was able to paint a vivid picture without giving too much description or pausing to show individual thought (something I had to learn to emulate). Even his characters and dialogue are simple, despite seeming like characters from Tolkien’s work.

Finally, Brooks taught me about writing a page-turner. In all of his books, there are characters with secrets, and in each one, Brooks does a masterful job of keeping the reader guessing as to what it is. Whether it was the true power of the Sword of Shannara or the secrets of the Druids, the hidden history of Landover, or the heritage of the Knights of the Word, Brooks made all of his books addictive page turners, with a reveal that made each page well read.

What Writers Can Learn

For the most part, Brooks should really only appeal to fantasy fans. While his characters and stories are strong, and his gift for page tuners is amazing, he offers writers of other genres little to inspire other genres. Still, there is a wealth for fantasy fans, and even non-readers can admire Brook’s mastery of the craft. As with Stephen King last week, the best I can offer is a selection of his work. The two main Shannara series (the original trilogy and the four part Heritage) should appeal to fans of Lord of the Rings and Harry Potter fans looking for new material. Landover is an excellent light contemporary fantasy while Knight of the Word travels similar, but much darker waters. Pick up whatever interests you more, but I highly recommend starting with Sword of Shannara as your entry point into Brooks’ rich world.

← Points of Light: Stephen King
Portals to Darkness: The Mary-Sue →